Written by medievaldragon on March 8, 2014. Posted in Hearthstone: Heroes of Warcraft, Uncategorized

IEM Katowice Hearthstone Tournament takes place next week from March 14th to the 16th and will be home to a Hearthstone tournament of epic proportions. If you’re planning on attending IEM Katowice, and you believe in your Hearthstone skills, be sure to take part in ESL’s online qualifiers so you have a chance at securing your share of the $4,000 prize pool. Blizzard will be there promoting their games, so be sure to swing on by the Blizzard booth to get your picture taken with their gigantic card.

Last year’s IEM Katowice was a huge success, with 50,000 on-site visitors and more than 5 million unique viewers tuning into ESL’s live streams. This year’s event promises to be just as epic, with lots of eSports action and awesome Hearthstone activities!

ESL will host the Intel Extreme Masters Season VIII World Championship at this year’s Katowice event. Fans are invited to watch StarCraft II superstars from around the world compete for glory and their share of the $250,000 USD prize purse.

IEM attendees can also participate in many fun Hearthstone activities we’re organizing with Intel and ESL at the event. Are you a card-slinging expert? Why not prove your skills against other Hearthstone talents for a slice of a $4,000 USD prize pool! Think you have what it takes? Head over to the Hearthstone sign-up page to enroll in the qualification round for the chance to play on stage.

If you don’t make it to the finals, don’t worry – you’ll still be able to play some Hearthstone at IEM Katowice. Stop by the Blizzard booth to try your luck against members of the EU Community team and other players, and maybe even win some epic loot. If you’re not familiar with the game, we’ll show you how to play. It’s easy to learn and tons of fun!

And That’s Not All…

You and your friends can be immortalized as a Legendary card at our Hearthstone photo booth! Strike a deadly pose and capture the moment forever with a souvenir photo. Your card photo may even be featured on one of our social media channels. 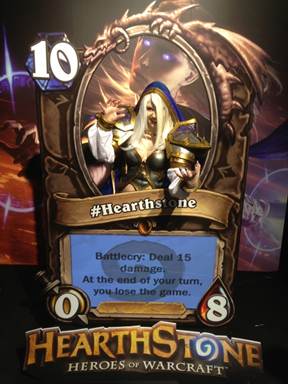 The Polish cosplay group Real Life Raid will also be joining us at the Blizzard booth, greeting visitors and posing for pictures. You may recognize them from last year’s BlizzCon Talent Contest, where they were among the finalists of our “Community’s Choice” poll with their awesome video, Why Do Leaves Fall.

So, if you’re at IEM Katowice, be sure to stop by our booth at any time during the event. You’ll be able to mingle with fellow players and members of the EU Community team: Zhydaris, Wuluxar, and Prokkar. Come say hi!

We look forward to meeting you at this epic eSports event. For more information on the Intel Extreme Masters Katowice, visit the official site and the Facebook page