The Most Underrated Cards of GvG

Written by medievaldragon on January 4, 2015. Posted in Hearthstone: Heroes of Warcraft, Uncategorized

It’s been almost a month since Goblins vs. Gnomes has been released and the metagame has shifted drastically in constructed play to accommodate the introduction of these new cards. Many cards, such as and are seeing regular play in common decks like Zoo and Handlock, respectively. In general, the minions from this expansion have defined the new style of play, ranging from the deathrattles of the piloted minions like and and new powerful legendary minions such as and . However, there is still unexplored space in constructed for new strategies and new cards to make it into the metagame. The cards detailed below are some cards that I have deemed “underrated,” as in they are not currently seeing much action in ranked play right now but could potentially see more action in the future. 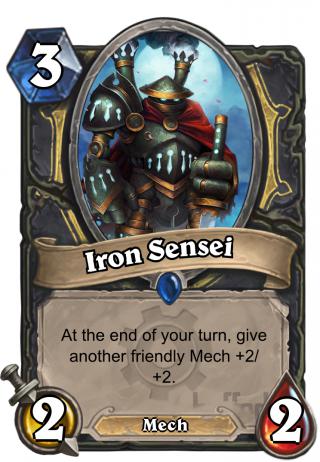 (2.6% use in Rogue decks): At first look, this card doesn’t look too special as it costs 3 for an underwhelming 2 attack and 2 health, but its ability is what could make this card a game changer. If played on a turn with another mech minion on the field, it gives a +2/+2 bonus at the end of the turn, essentially giving 4/4 stats for 3 mana if played correctly. This last part is the toughest part to fulfill as the bonus is given at the end of the turn, which makes this less useful than say that of . However, if used well in a Rogue mech tempo deck, this card could really make smaller mechs like the into sizable threats. In the event the opponent cannot deal with the Iron Sensei immediately, the card could snowball a player to victory, and because of that, the card almost has a “taunt-like” ability, in which the opponent cannot afford to ignore the sensei. The card is limited due to its situational use but in a deck revolved around building boards full of mech minions, the sensei can win games.

(0.69% use in Warlock decks): A 4 mana 3 attack 5 health minion also has an “end of turn” ability that shoots two damage randomly to a non-mech minion. In the constructed ladder from ranks 15-5 against many zoo or hunter decks, this ability could work wonders in removing threats efficiently. Against those fast decks using multiple low cost minions, the card can often trade 2 or 3 to one if played correctly. Even in matchups against control decks, the two damage may help in trading lower minions up for legendary minions. This card is also a mech and there haven’t been many experimentation on warlock mech decks, but there is probably good reason for that as the other deck archetypes (Zoo, Handlock, Demonlock) have proven stronger as of yet.

(1.09% use in Warrior decks): This card costs an insane amount at 7 mana but it has a powerful removal effect in destroying a minion. With a damaged minion, the card costs 4 less and makes this card very situational. For 3 mana, destroying a minion is expensive in control warrior decks as and both do the same for only 1 mana. However, if the meta becomes more “greedy” with bigger legendaries being packed into handlocks and warrior decks, this card could see more play. There are ways to damage your own minions with cards like to activate the card but still the situational high cost of 3 mana could keep many decks from cutting an important card for this one.

(0.28% use in all decks, most (0.41%) used in Mage decks): The Bomb Lobber is a 5 mana for a 3 attack and 3 health minion that deals 4 damage to a random enemy minion. Although the effect is random, a skilled player can manipulate the board to direct the 4 damage to a desired minion. This battlecry ability when played well can ensure a two for one scenario or allow for a trade up. However, one deterrent for playing the card is it’s high mana cost and associated low body. As of right now, the metagame involves many sticky minions with deathrattle and so the use for this bomb loving goblin remains low. In a deck designed to gain tempo, this card provides that at a high mana slot and could be worth a look. 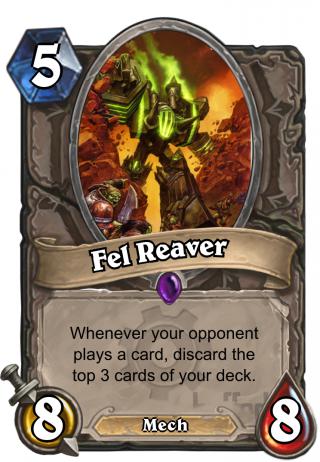 (0.17% use in all decks, most (0.4%) used in Warlock decks): The hotly debated card of GvG has been heralded by some and blasted by others, but the truth is this card in constructed has not been fully explored. For 5 mana, the card has an 8 attack and 8 health body with a unique ability in which opponent’s cards played will cause your deck to burn three cards from the top. Basically, for playing a huge threat ahead of the mana curve, the drawback is losing cards off of your deck. There were some popular decks previously using to silence minions with drawbacks that could be viable in a deck built around this card and others with massive drawbacks. Especially since is already popular in Handlock decks, this card could slot right in instead of one to serve the same role but with higher attack and health. My current feeling is that we haven’t yet fully explored this card and that decks could be built around this card.

This wraps up my current summary of some of the underrated cards from GvG. There are bound to be more with currently unknown synergies waiting to be found so always feel free to experiment on the ladder! There are pros and cons with playing any card over another and so finding the right mix of 30 cards is definitely the next challenge for this new year.